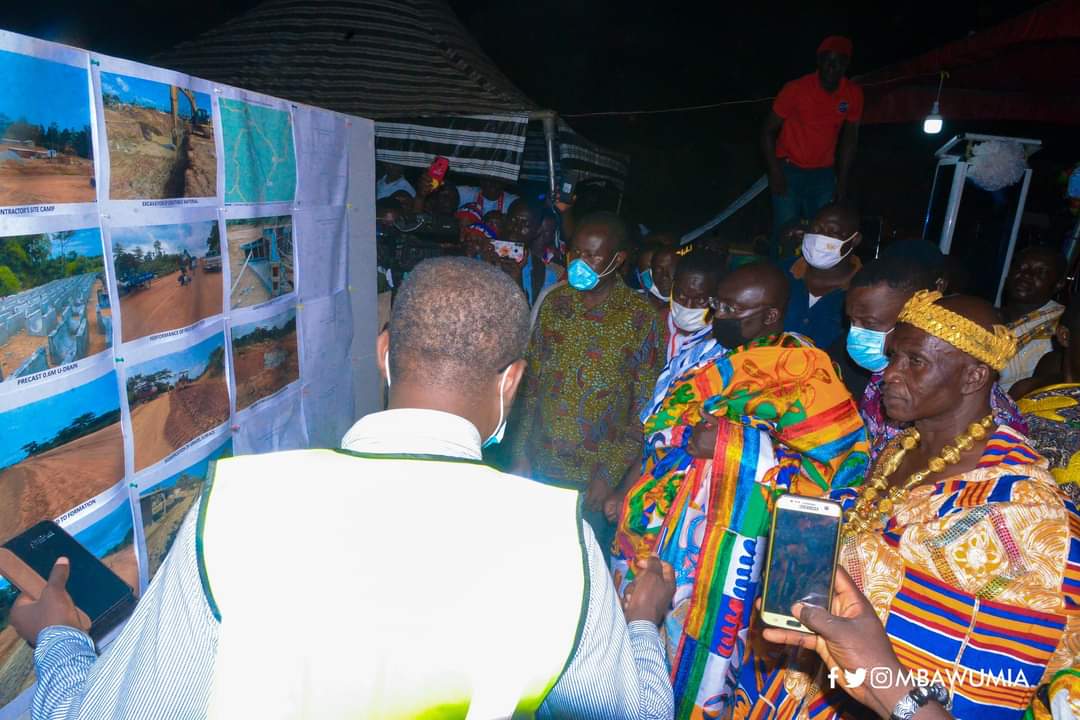 Vice President, Dr Mahamudu Bawumia, has cut the sod for the construction of two new critical roads in the Western Region, which are being funded by the Ghana Cocoa Board (COCOBOD) under the Cocoa Roads Programme.

As part of the construction, the cocoa roads which are over 120 kilometres long, are being upgraded from their present rugged and narrow feeder roads state to 10.3-metre-wide modern carriage highways.

The Vice President, who is on a tour of the region first cut the sod for the 53.9-kilometre Adesu-Afransie-Ankwaso road, which includes the construction of two (2) 30-metre-span concrete bridges at two river crossings.

Speaking at the sod-cutting durbar, on Thursday, 8 October 2020 at Woratrem in the Wassa Amenfi Central District, Dr Bawumia said, when completed the road will act as a catalyst for the socio-economic growth of the various towns along the road. It will improve the riding quality of the road and reduce vehicular operating and travel time.

He added that, accidents and vehicular breakdowns due to the present bad condition of the road will be reduced, hence, the safety of lives and property will be enhanced. Also, in case of an emergency, there will be a good road to transport people (especially pregnant women and accident victims) to nearby hospitals.

The Chief Executive of COCOBOD. Hon. Joseph Boahen Aidoo, who was present at the durbar, also stated that, the road will address the transportation challenges which cocoa farmers along the corridor of the road face when evacuating their cocoa beans to Take Over Centres and lead to an overall reduction in the transportation component of their production cost.

The road, which is being constructed by GHACOS routes through several important cocoa producing communities and a cocoa research substation of the Cocoa Research Institute of Ghana (CRIG), a subsidiary of COCOBOD.

It also connects to the Ayamfri-Sefwi Wiawso road and, as such, expected to become a very popular route for many motorists travelling due north from the Western Region to the Western North Region.

The contractor, who has already mobilised to site, has commenced some earnest earthworks. The vegetation on some 26 kilometres has been cleared to widen otherwise narrow parts of the road, large stretches are being levelled and several critical culvert drains can be seen at various stages of construction. These have already made the road more accessible to traffic.

Vice President Mahamudu Bawumia and Hon. Joseph Boahen Aidoo attended a second durbar at Suhyenso in the Wassa Amenfi East District, to cut the sod for the Dawurampong roads project, also awarded for construction under the Cocoa Roads Programme.

The contractor for these road projects, Greenhouse Int'l Dev. Ltd, has also already mobilised to the site – clearing, widening, and performing other preliminary earthworks on the road.

The two (2) highway projects will be completed in 36 months. Engineers from COCOBOD are working in conjunction with engineers from the Ghana Highway Authority to supervise the projects.